This release adds new features and bug fixes to v6.0.9 for Windows and v6.0.10 for Mac. You will require a v6 licence key to unlock the full functionality. v6 is a paid upgrade from v5 (free if you purchased v5 within 3 months of v6 being released). You can buy a new licence key here (or upgrade from a previous version here). See also our upgrade FAQ.

We recommend that you back-up important plan files before installing any new release.

The download links are at the bottom of the page.

This version can read plan (.tp) files saved by any earlier version of PerfectTablePlan. But reading v6 plans into versions of the software before v6 may lose some data.

1. You can now draw spacing guides around seats. The guide is centred on the approximate position of a guest's nose and mouth, to help you with social distancing for COVID-19. 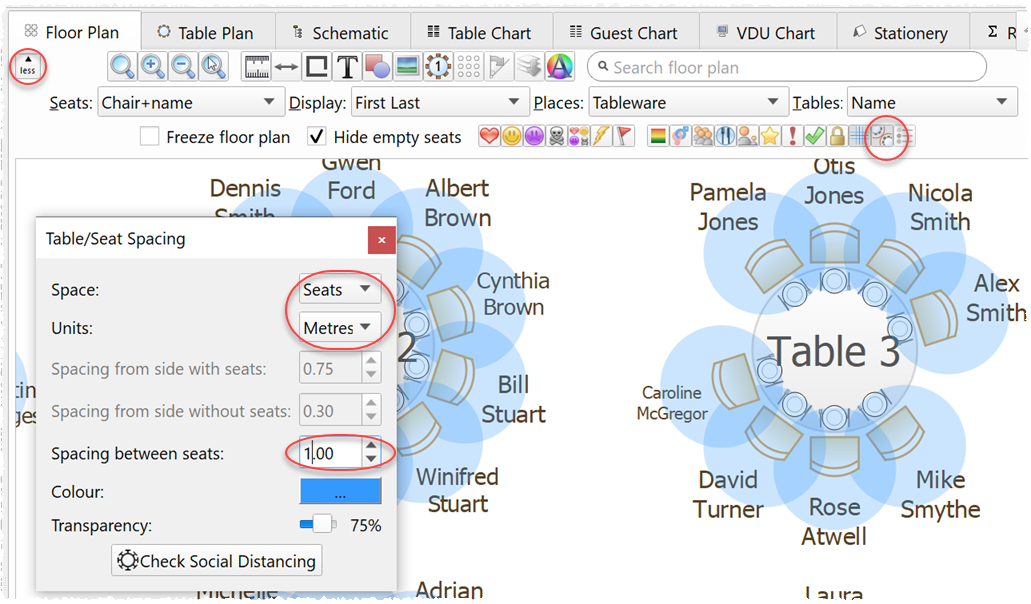 2. You can draw lines between any two members of different groups that are less than the required minimum social distancing. 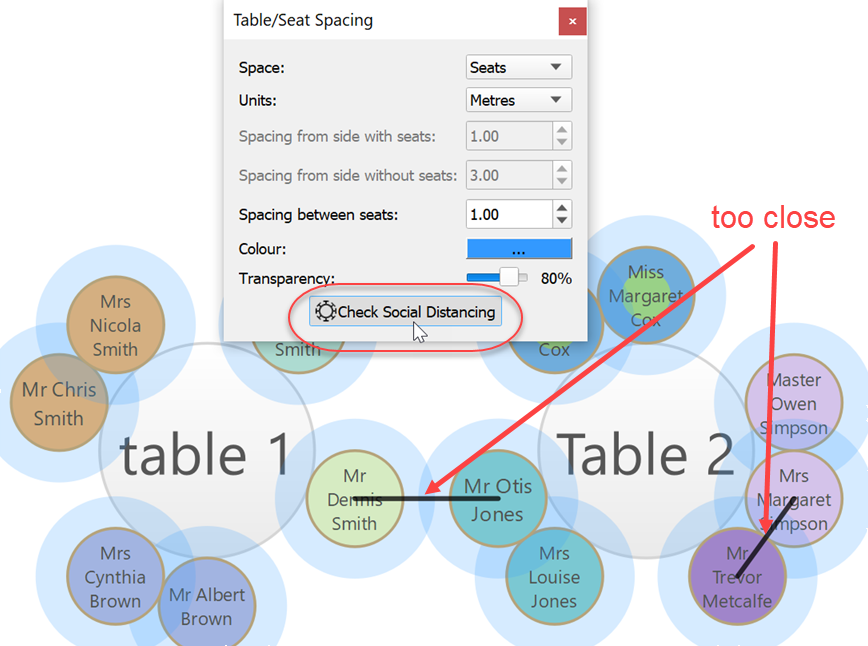 3. Rows of seats can now be curved. Set Curved to greater than 0 to curve the seats. The maximum curvature is 180 degrees. 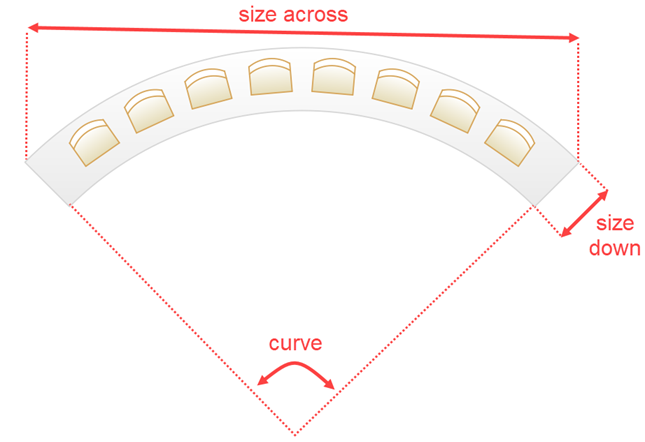 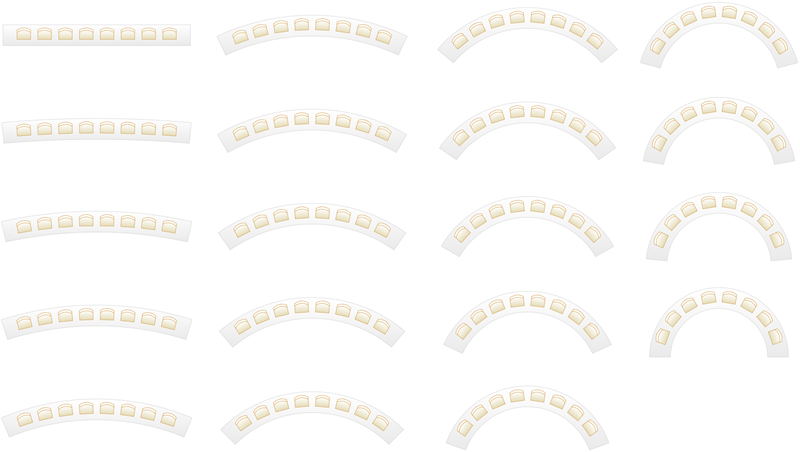 4. If you set Ignore first to a value greater than 0 on import, then the last ignored row is used to set column names. This is for guidance only and does not effect the import. 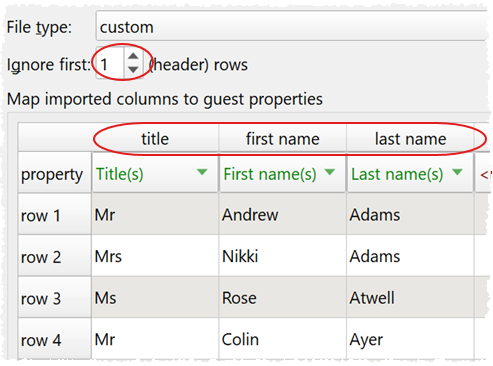 6. Some issues related to Detailed (guests) and Detailed (summary) reports of Meal and Special fields have been fixed in the Report pane.

7. If you press the Menu key the pop-up menu now appears at the position of the selected object. Previously it appeared at the cursor position.

8. Previously the group name was not always updated correctly in the Groups pane. This is now fixed. Thank you to Peter T. for reporting this.

9. Previously semi-circular tables were not always correctly drawn. This is now fixed.

10. A new Table shapes section has been added to the Reference section of the documentation. It contains illustrations of the parameters used for various table shapes.

11. Fixed an issue where the busy cursor could stay on after start-up until the mouse is moved.

12. In macOS 10.15 (Catalina), saving a file over an existing file with the same name can cause a crash. This appears to be a macOS bug and we hope Apple will fix it soon. As a workaround you should either:

MacOS 10.14 and earlier are not affected.

13. All issues encountered during importing custom fields, proximity and seating are now shown. Previously a maximum of 5 were shown in the window. 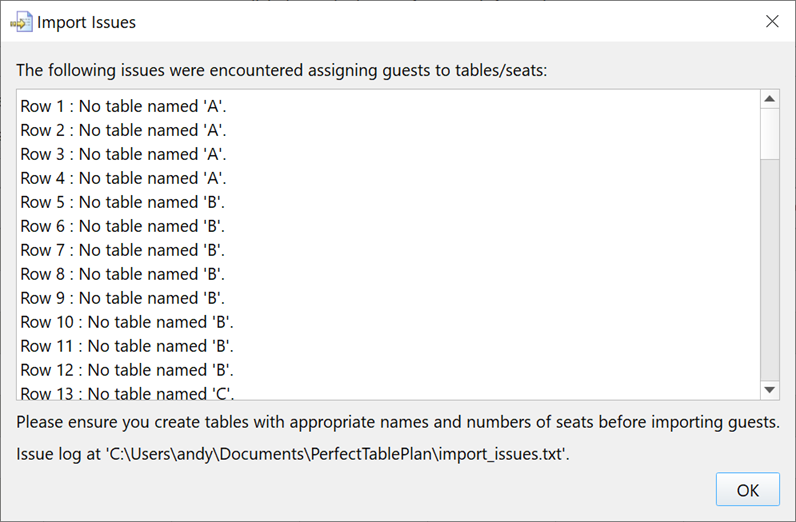 14. PerfectTablePlan will now try to guess the name of a new custom field added during import from the column header.

15. In the Import Data window, if a column with blank cells is imported as a custom field of type Selection, then the default value will be set to Undefined.

16. In the Import Data window, if a column containing comma values is imported as a custom field of type Selection, then the commas are removed. This avoids issues with the list of allowed values, which is comma separated.

17. Previously importing a column as a custom field of type Selection with > 30 characters could cause issues. This is now fixed.

18. Changes to the names of custom fields are now updated in the Import Data window.

19. Previously the guest right-click menu was not updated if you added a new allowed value to a custom field of type selection through the Guest Properties window. This is now fixed. Thank you to Peter T. for reporting this.

20. Some issues related to Detailed (guests) and Detailed (summary) reports of custom fields of type Tags have been fixed in the Report pane.

Please notify any bugs or problems in as much detail as possible to support.